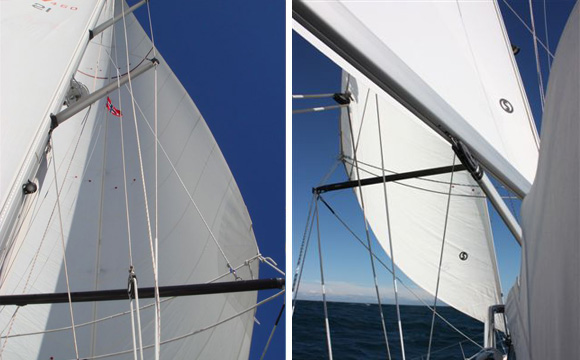 Developed with Iain and Jan Simpson. This sail rig has taken the couple across the Atlantic many times on a number of yachts. Their experience is extensive and we are grateful for the following contribution where Iain gives detailed set-up & tuning techniques.

Although developed for short handed ocean sailing, the Simbo Rig (simple bow rig) could prove useful to the short handed coastal cruising sailor and those who are not inclined to handle flying spinnakers on a heaving foredeck in open seas. What is required is a twin grooved jib furler to which one hoists two identical jibs on a single halyard. These sails have two sets of sheets which lead through the fairleads and on up to the cockpit winches.

On the wind and also when reaching, one trims the upwind leeward jib to which you then tighten-up the downwind lazy jib. Whereas it is useful to have two cockpit sheet winches for this purpose it is not essential, as the downwind sheet carries no load and can therefore be made-up by hand. When bearing away to a run with the wind up to 40 degrees off the stern, one hoists two whisker poles on their relative boom lifts against fore and aft guys made off around the fore and amidship cleats. If these are made up to measured marks, one can simply hoist the whisker poles until tight against their fore and aft guys in the knowledge that the poles are then at right angles to the boat and horizontal with the horizon.

At this stage, the downwind running sheets together with the upwind reaching sheets are led under the whisker poles’ retractable bolts and then through the fairleads on to the cockpit winches. When proceeding on to a run from a reach, one pulls the upwind leeward jib across the foredeck to split the jibs, to leave the then lazy reaching sheets laying idle. The wind captured in the weather jib is redirected into the leeward jib to keep it fully powered when otherwise it would be blanketed by the mainsail. The mainsail boom is eased to no more than 45 degrees off the centre line which enables its accumulated wind to be dispatched around the mast into the weather jib which is then also directed into the leeward jib.

Another reason for restricting the main-boom, is to avoid it directly opposing the pressure exerted on the mast from the weather whisker pole. As the leeward whisker pole exerts no mast pressure, this all translates into minimum downwind boat roll. The only reason for the leeward whisker pole is to take over weather-sail duties following a gybe. All that is required to expedite a gybe, is to haul-in the mainsheet and then release it on the other downwind tack, leaving the jib sheets & whisker poles undisturbed. 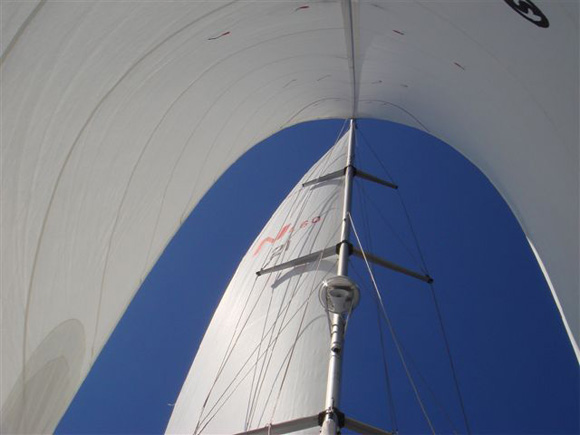 When returning to a reach, one merely backs the weather jib by coming onto the wind, which allows it to fly across to leeward to become the dominant up-wind reaching sail. The sheets can still run under the whisker pole retainer until hardening up on the wind when they are released by retracting the whisker pole bolt which permits the whisker pole to be stowed down its leeward mast position. The weather whisker pole will of course, have already been stowed.

Apart from the setting-up and stowing of the whisker poles, there is no foredeck work required as the sails are entirely controlled from the cockpit. When striking the sails from a run, one allows the running weather jib to once again, return to leeward on a broad reach to then roll away the two sails together, with the aid of the furling line. There is no noticeable excess wear on the twin sails when they are flown together on the reach, although I would advise changing the halyard’s snapshackle for the stronger screw shackle, as the twin jibs are likely to work a snapshackle to metal fatigue!

The absolute control of the Simbo Rig by one person from the security of the cockpit, in fair or foul weather, through night and day, gives one complete confidence in all conditions. I have sailed across the Atlantic Ocean with our N460, N511 and now N570 six times with this rig and Jan and I, would not consider using any other sail plan. In my opinion, coloured sails are only appropriate for the racing fraternity and cruising sailors who carry a full complement of competent crew.

The sails which Owen Sails designed and made for our N460 in c2002 and N511 in c2005 were excellent. The only reason why our subsequent N570 had alternative sails, was because the yacht was sold with the sails already installed which was frustrating when I had previously acquired all my sails from Owner Sails since c1992 when I bought a Hallberg Rassey 39.  C’est la vie !  For further information on the Simbo Rig however, please go into my website on  www.rhbell.com/simbo